Deck coated with Kiwi grip over the epoxy fibreglass and 2 layers of plywood deck. Margin boards are varnished flooded gum.

Berths upholstered. White beech cabin soles. The control lines are for the Bartels under deck furler.

Isabella loaded on my trailer ready for towing to Woolwich dock for launch.

Rigged and ready for launch

Isabella racing on Sydney harbour. We raced her every weekend from her launch through until the season ended in March. The winter series started in June but has been interrupted by lack of wind and now Covid.

Isabella has performed beautifully since launch. The electric drive system is a delight and Isabella has had great results racing against other Folkboats and in handicap events.

Isabella was featured in the Wordwide Classic Boat Show earlier this year and has recently appeared in the “Launchings” pages of Woodenboat magazine.

Here is a pic of the sliding skipper’s seat, the white beech sole and the controls and instrumentation  for the motor system 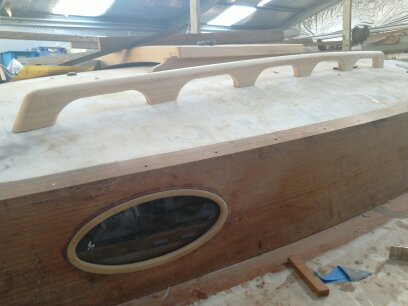 The window frames are made from laminated NZ Kauri. The grab rails are celery top pine. 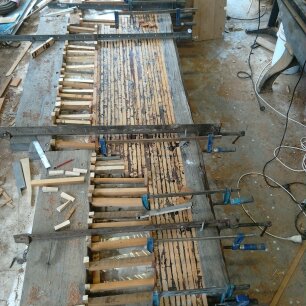 Here is the glue up for the rudder blade. Laminations of NZ Kauri with grain direction reversed between each. Resorcinol glue. Needs lots of clamp pressure so achieved this with lots of wedges, sash cramps etc. 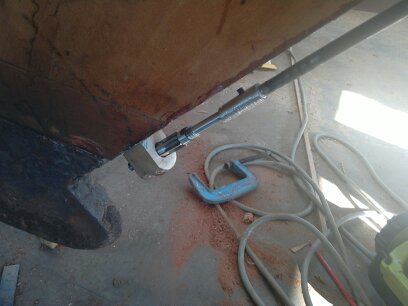 Line boring the rudder gudgeons.  I cast these in silicon bronze together with the pintles 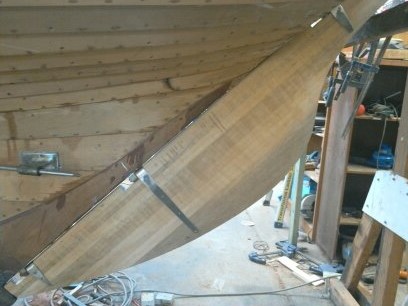 The rudder pintle cheeks run full width to give the blade transverse strength. Since this pic I have added a bronze strap between the top and middle pintles 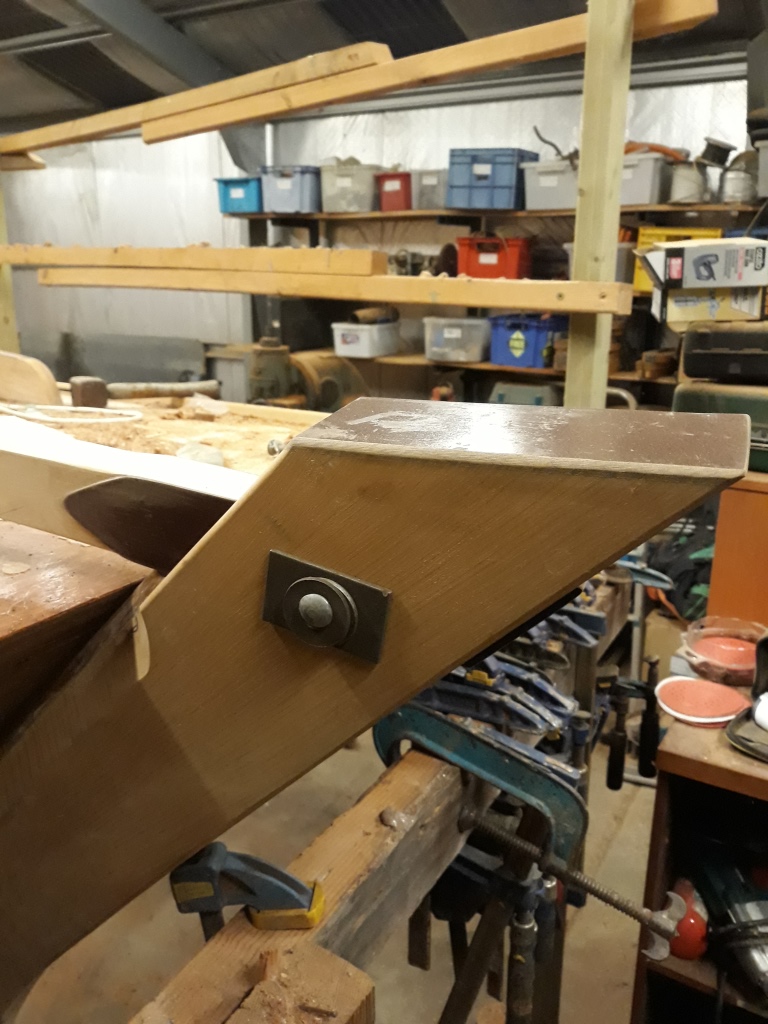 The rudder stock is topped with tufnol to protect the end grain. There’s also tufnol between the tiller and the stock where the tiller pivots. 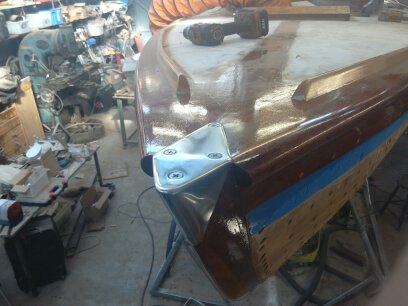 Last day in the shed. We have had concerns about bushfires so I moved the boat to a safer place on our property.  The cradle has rollers under the keel so I was able to winch it out onto the trailer. 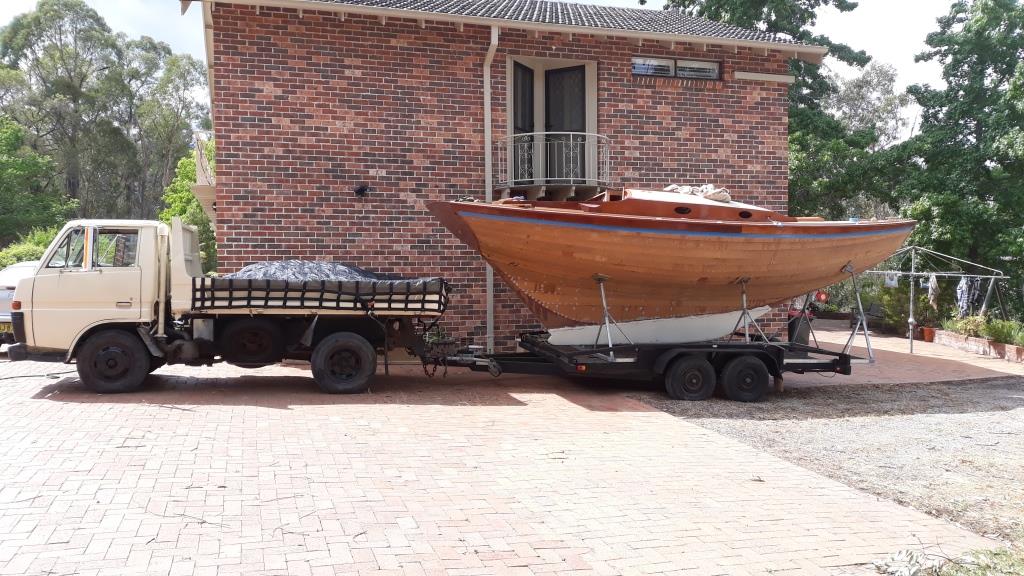 Here’s the boat near the house. I have built a canopy over it to protect it over the next couple of months.

Before moving I sandblasted the keel  with garnet then coated with Interprotect.  Simple sandblaster setup with a 20kW Atlas Copco compressor from Ebay and simple pot.

Current work going on is painting the cabin roof.  5 coats of Yacht Primer sanded between, tomorrow will be 3rd coat of Pre Kote before Toplac.

Other jobs recently were installing bilge pumps and final fit of cabin internal fitout.  Also refurbished the spruce mast and boom from the original US boat.

Hopefully just a few months away from launch.

The Folkboat Association of Australia website is under reconstruction’

It can be found at http://www.folkboat.org.au

Deck is built from 2 layers of gaboon plywood with epoxy fibreglass covering.  Margin boards and rubbing strips  are flooded gum. The inner edges of the margin boards have a slight recess – about 1mm so the fibreglass can overlap for a good seal. Red cedar top strakes will be varnished.

The propshaft strut and skin fitting are silicon bronze cast at home using a LPG fired crucible furnace.  The strut was made from 3 pieces tig welded together after getting the alignment right.

This is the propshaft skin fitting on the kitchen bench.  The dripless seal is mounted on a bronze tube silver brazed into the skin fitting casting. Like the strut this item was cast in two pieces then tig welded together after alignment.

Here’s the Flexofold prop mounted near its final position.

Detail of cabin coamings with rounded insert. All red cedar.

The deck beams are laminated NZ Kauri with 1 in 30 curvature. This was calculated using a spreadsheet.  This template was set for each beams using the calculated offsets 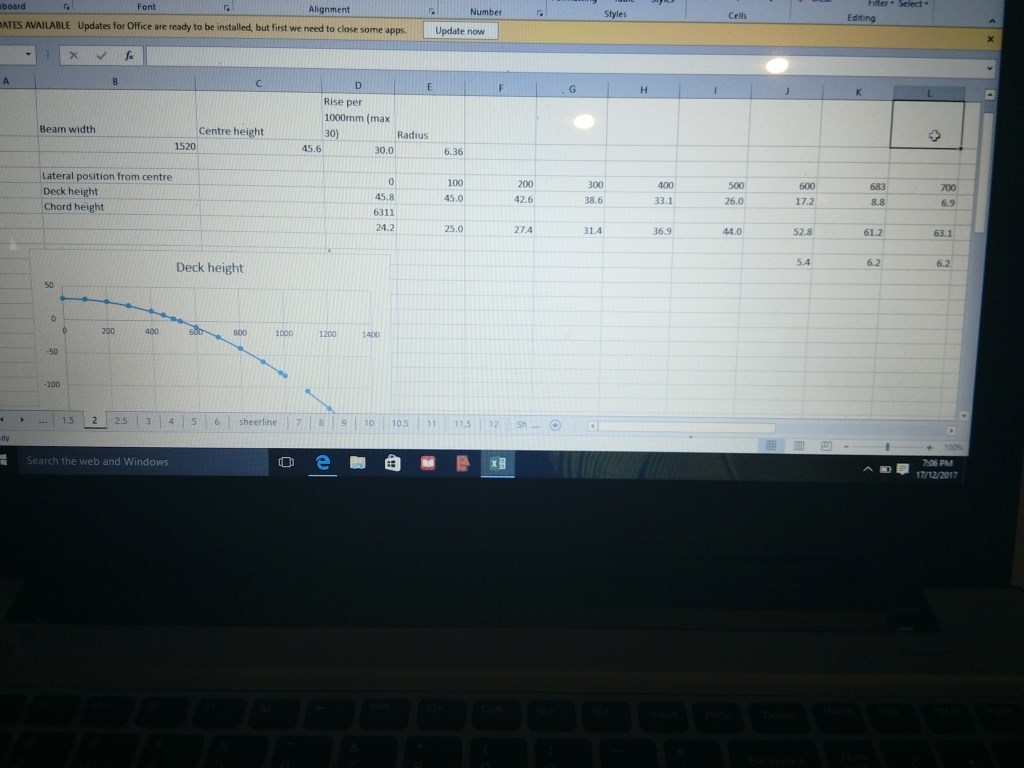 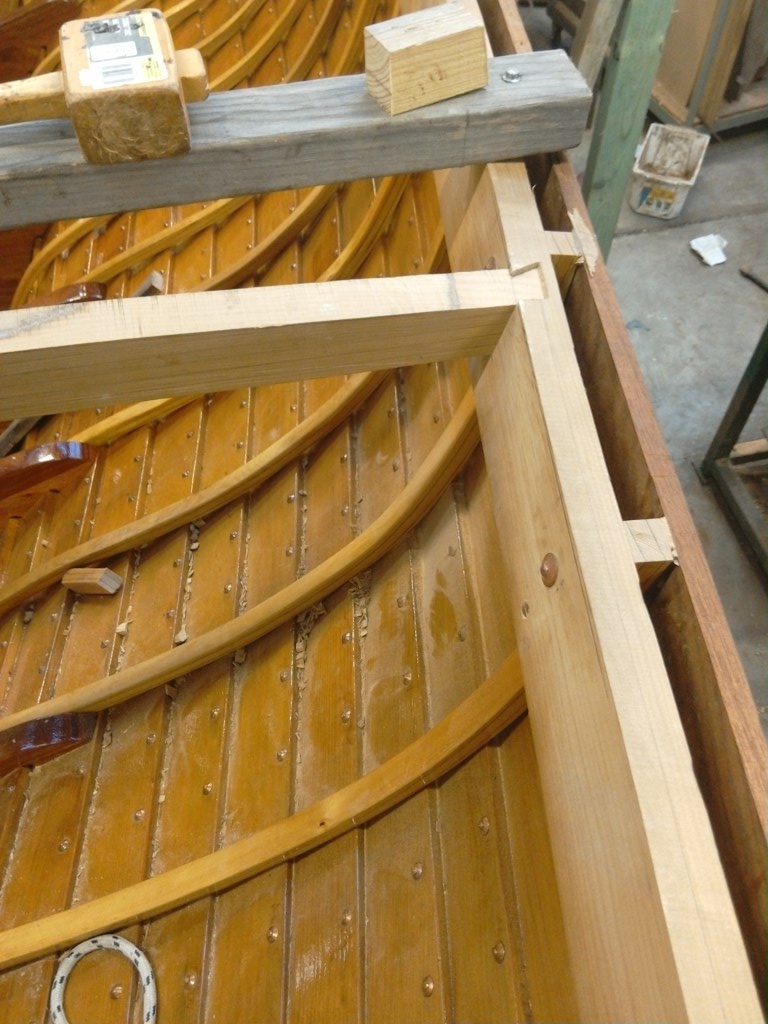 The deckbeams are fitted using tapered half dovetails at each end.  Multi tool followed by chisel worked well with a bit of practice. 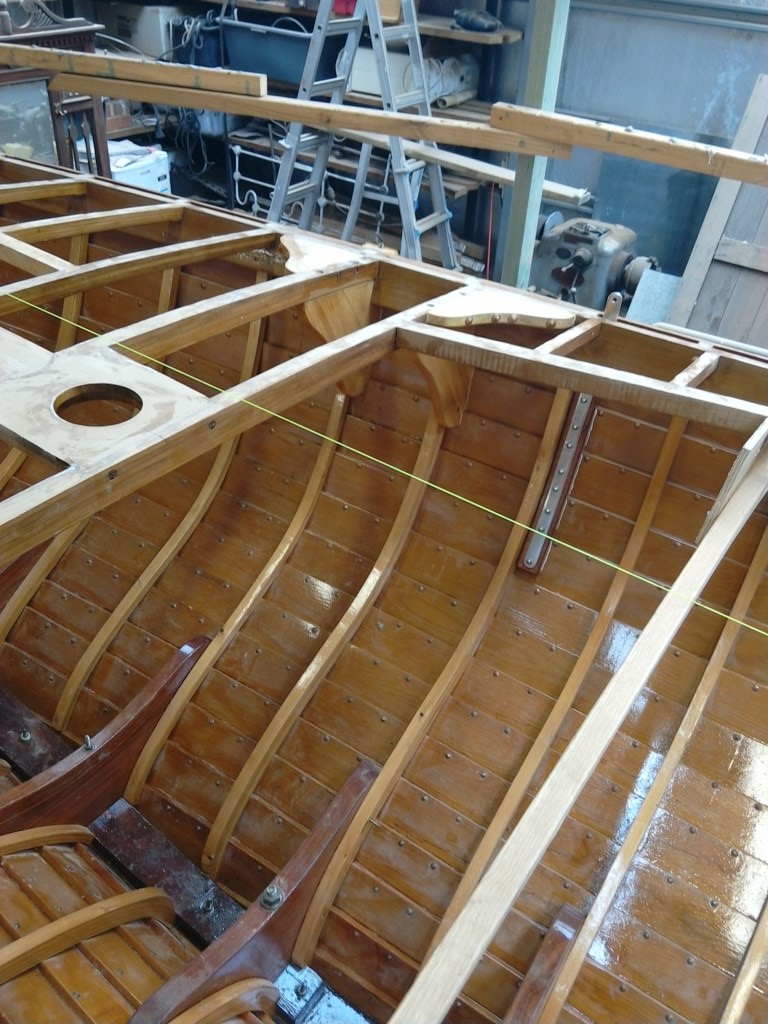 This shows the fo’ard end and king plank sections each half dovetailed into the deck beams.

First layer of 6mm gaboon. SS screwed and glued down. Butt joints scarfed over deck beams. Coated with epoxy on underside before fitting. The plywood bulkhead will be covered with cedar both sides.  It is there now to keep the boat in alignment 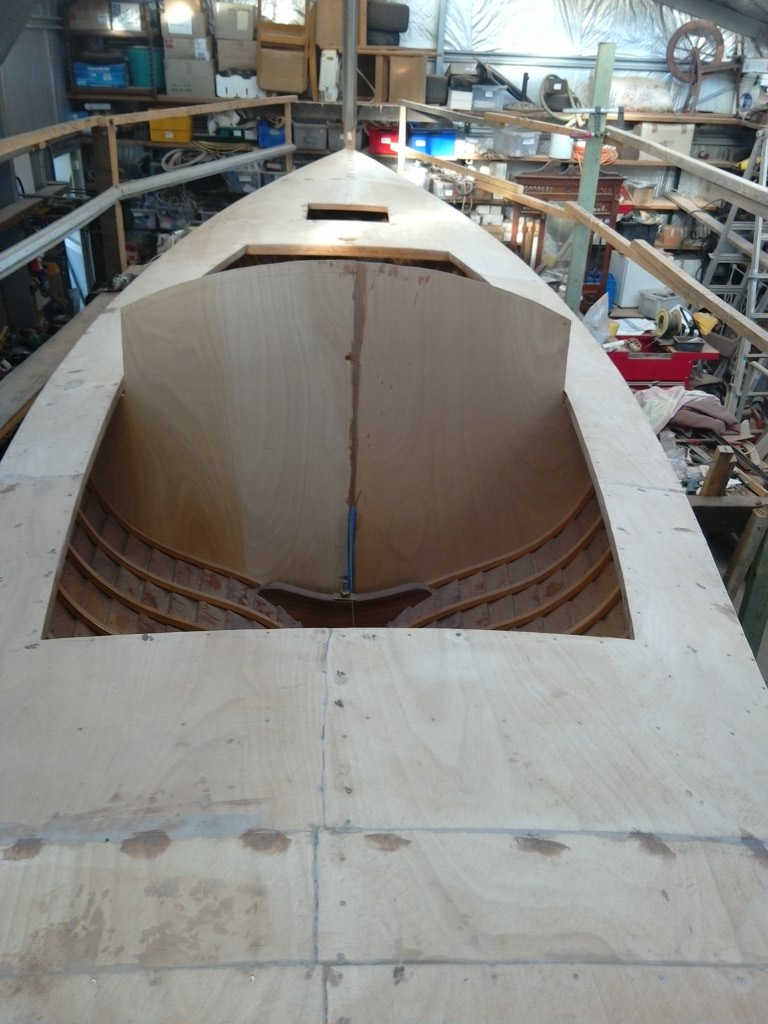 Second layer of 6mm gaboon was vacuumed down. This worked well. Initially used blanket as breather and soon found shade cloth worked very well. Vacuum pump was only .33 HP and worked well. Main trick is to make sure there are no leaks. Epoxy coating the first ply layer top and bottom reduces leakage through this layer. Sanded of course before bonding second layer 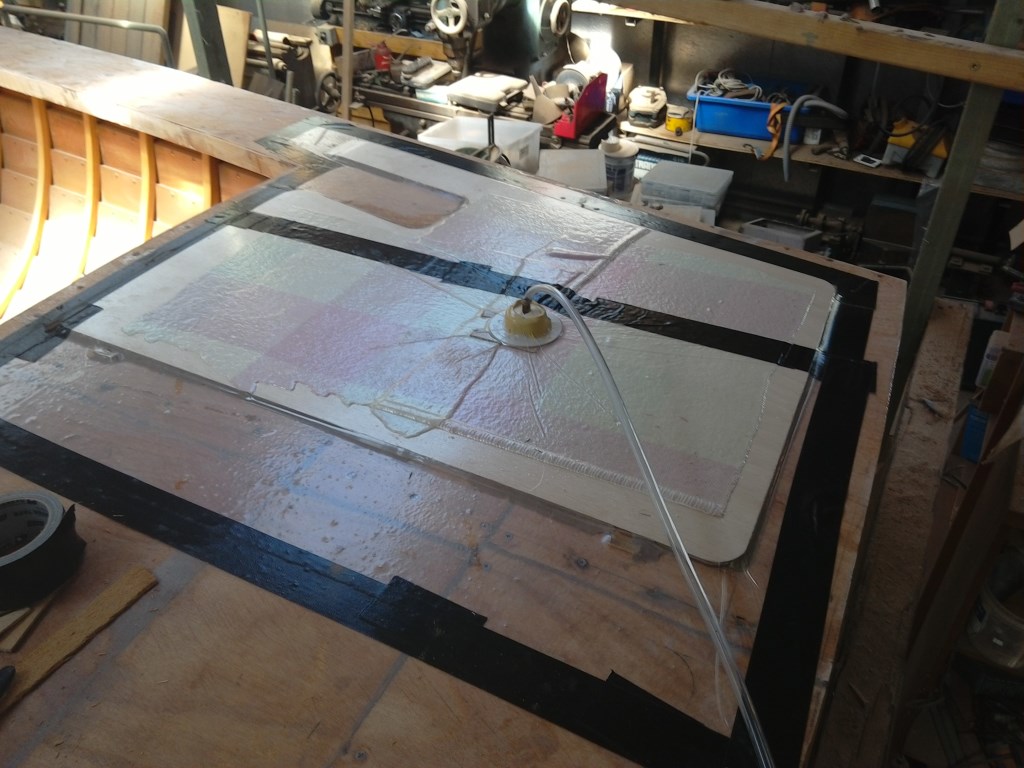 Flooded gum covering or margin boards surround all openings and run along the sheerline.  A rebate about 1.5mm deep is for the deck sheathing to overlap onto. 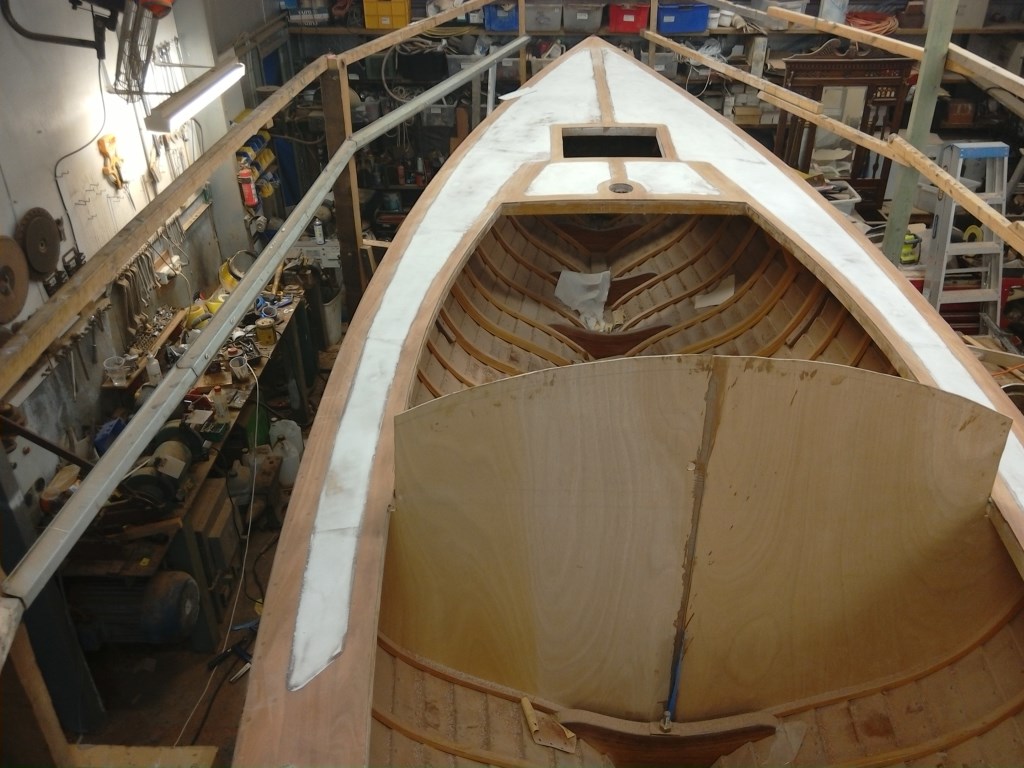 Here she is ready for Altex Timbercote varnish.  Already has about six coats of Deks 1 acting as a primer

First step in making each of the 58 ribs was to make a template using hot melt and small strips.

I marked the angle of the planks so I could bevel the ribs on the  inner and outer face.

A jig consisting of a series of blocks was then setup to steam bend the laminations and then glue them.

I made the laminations about 8 mm thick so that each  rib could be bevelled without cutting into the laminations and showing the glue line. I am using resorcinol glue and varnishing the interior. The ribs are made from Celery top pine from Tasmania

Being so thick meant that they needed to be steam bent before laminating.  I did this with a polythene sleeve and about an hour steaming with a wallpaper steamer.  I clamped the laminations into position with the steam still on so there was no hurry. 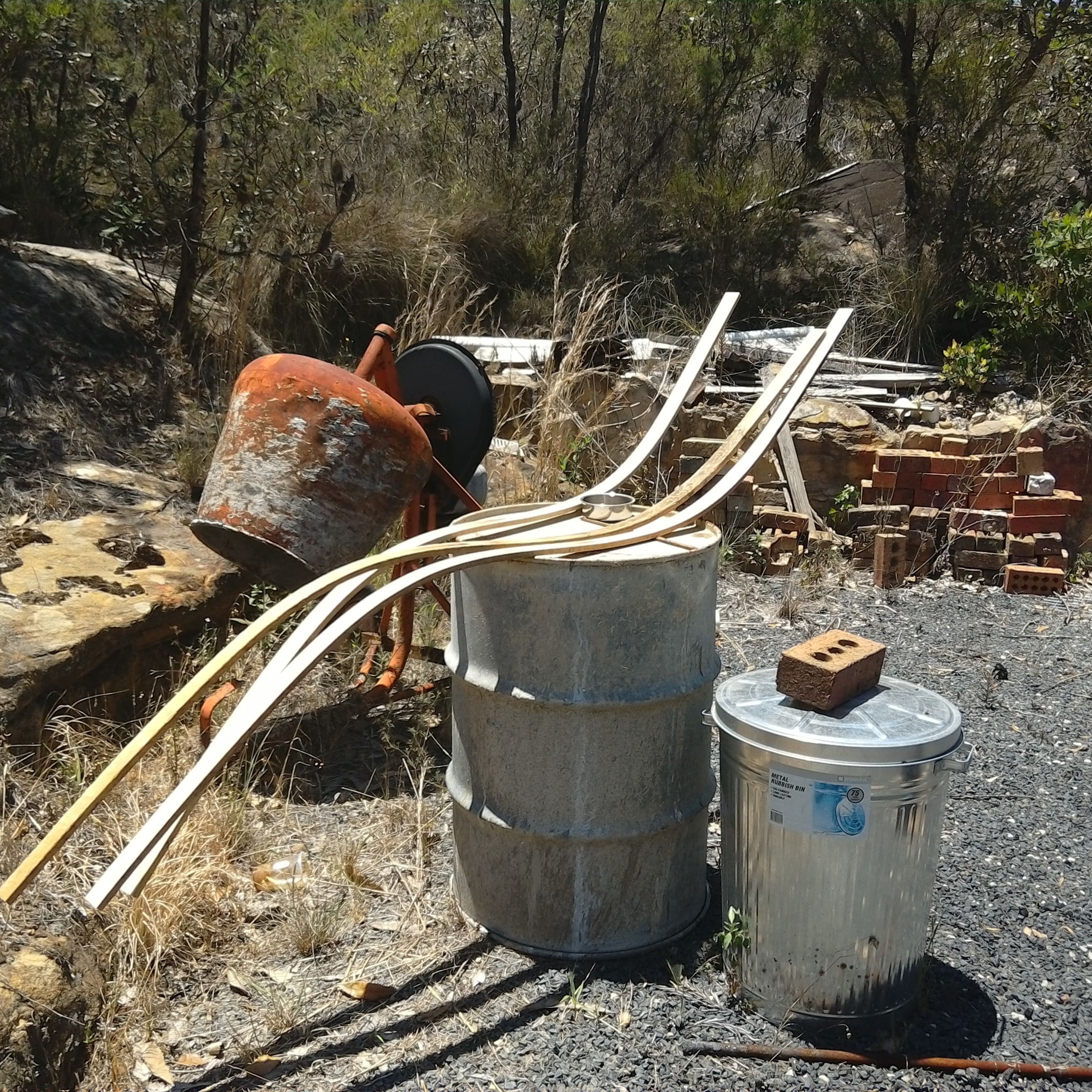 Gluing in the same jig  involved lots of clamps as resorcinol needs a lot of pressure.

Once cured there was very little springback even with only 4 laminations.

The rib was then resawn  to the exact shape using the original template without a bevel to fit the jig.

Any high spots were shaved off to make sure the laminated form fit the jig perfectly.

Each rib was then bevelled on the inner and out faces using the bandsaw with a tilting table.

The ribs were then screwed into position. Very minimal fitting was required to get a snug fit against the planks.

The  NZ Kauri sheer clamps were laminated into position in two halves.  They were the removed from the boat and trimmed to shape.  12 to 1 scarf joints were the prepared. The sheer clamps were then joined in situ and fastened with a combination of copper rivets and bronze screws.

Here is one of the double sided templates used for the floors.  The mdf sheets are held apart at the correct floor thickness.  Heavy cardboard tabs hot melt glued to the mdf follow the planking. 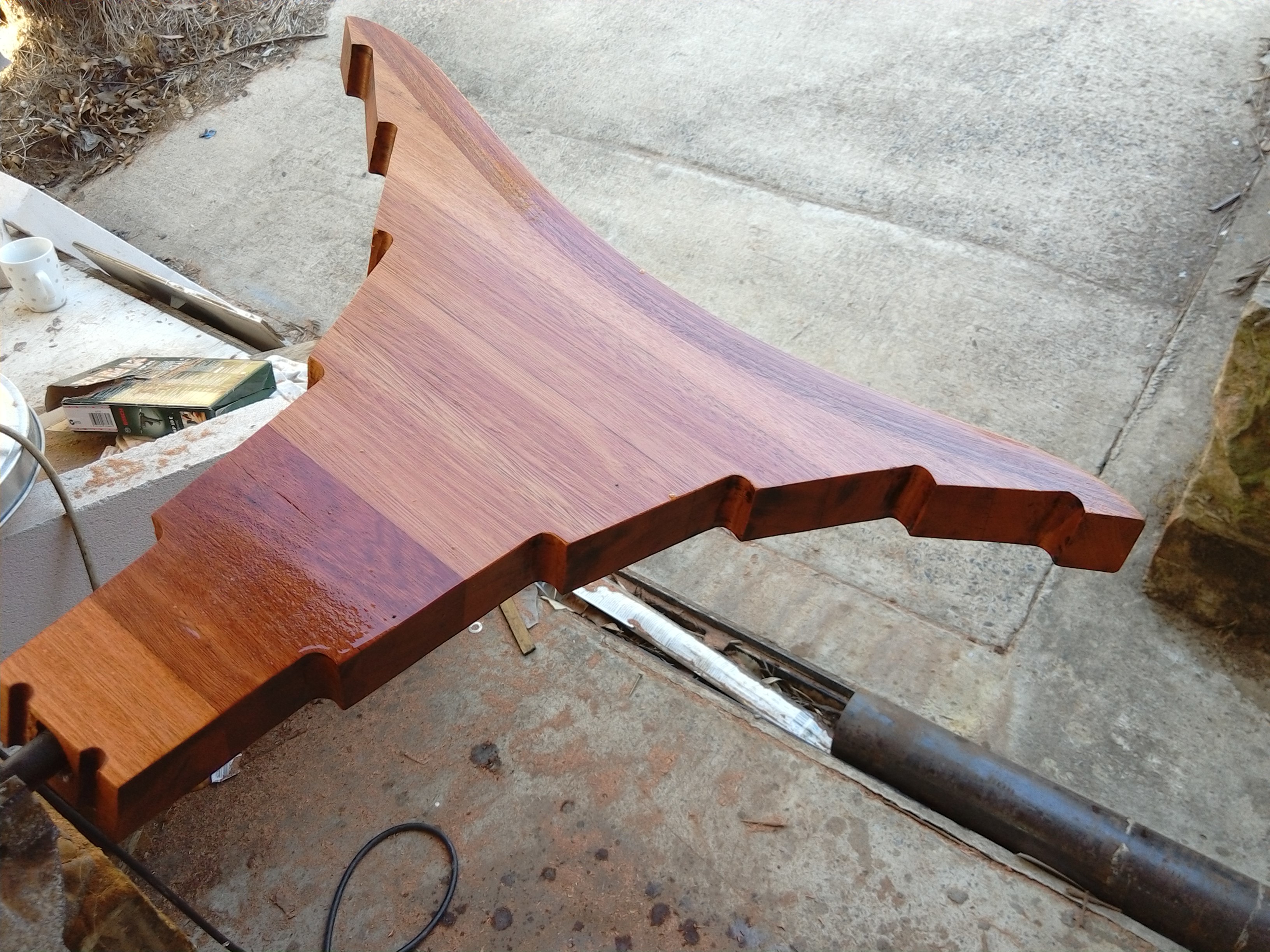 This is a floor ready for installation. Laminated Flooded Gum using resorcinol for the lower laminations and epoxy for the laminated arms. 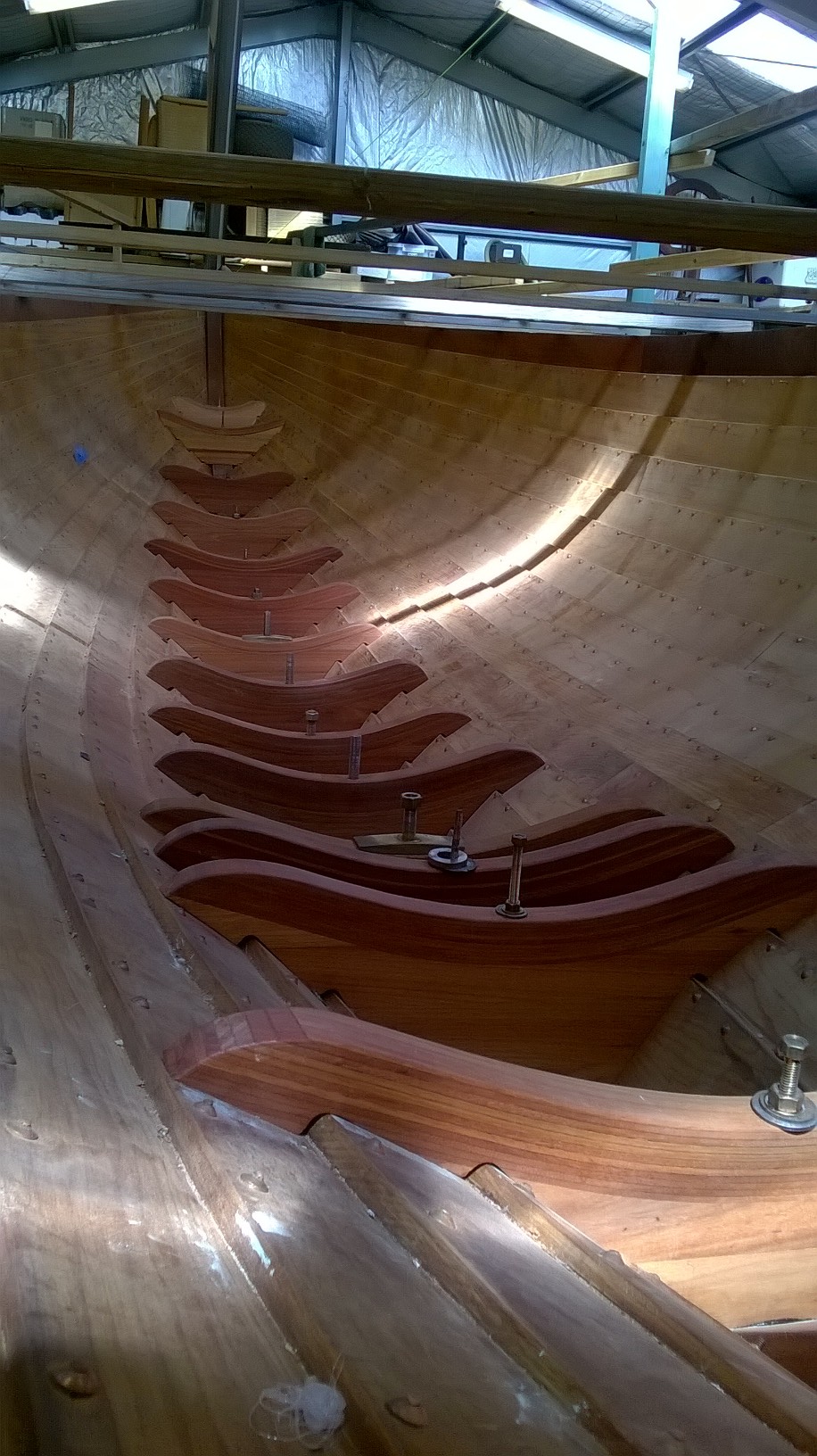 Station moulds out and access platform set up on port side reveals the splendour of the hull form. Lots of sanding and cleaning up to do before clear finishing the interior. 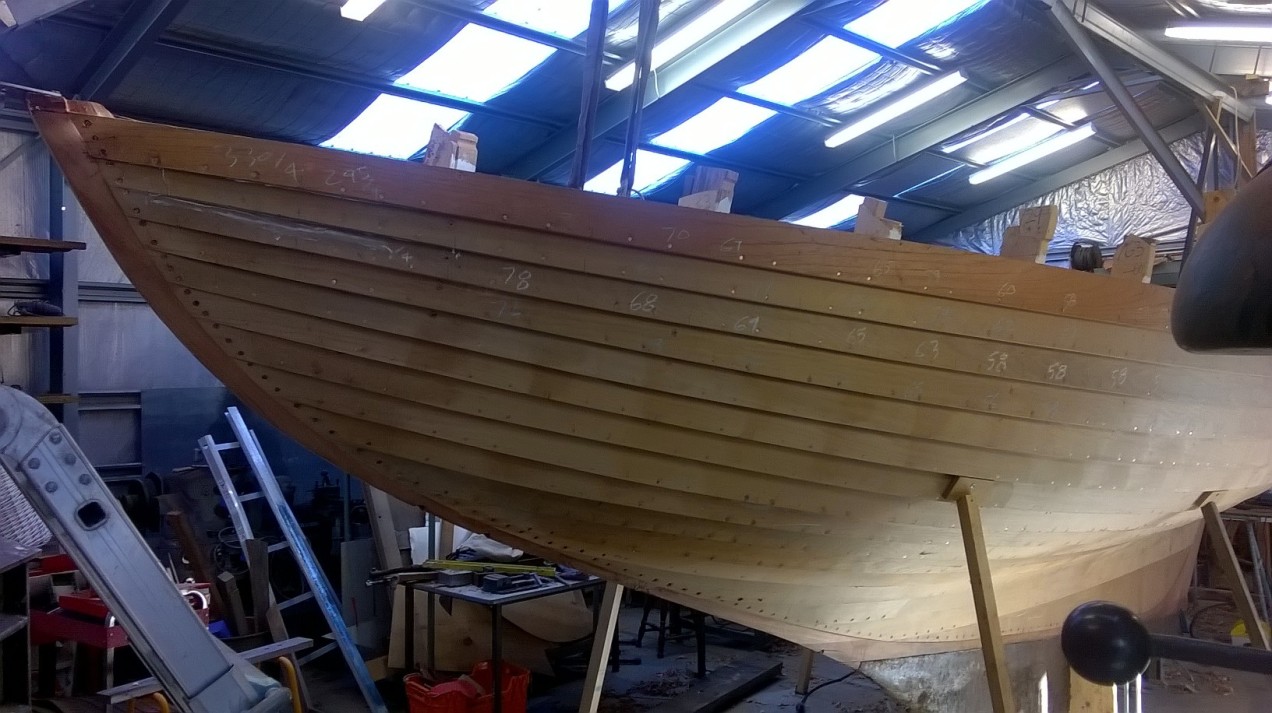 The last of 32 planks was fitted today. The sheerstrakes are Australian Red Cedar to provide a nice contrast to the sheerline.

Next steps are building an access platform, remove the station moulds and coating the inside prior to fitting ribs and floors.

8 Planks to go. It consistently takes 3 days to do one plank:

ie about a day to prepare plank.

ie another 2 days given a few breaks.